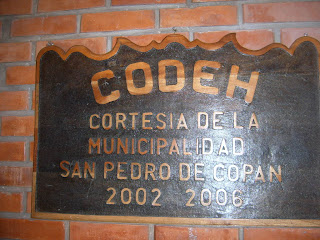 Meeting with Andrés Pavón, president of the Committee for the Defense of Human Rights in Honduras (CODEH)
www.codeh.hn.

CODEH defines itself as a nonprofit, nongovernmental humanitarian organization abiding by the laws of Honduras. It consists of a nationwide network of volunteers, and aims to help achieve an effective democracy through the rule of law and a strong civil society, and to strengthen human rights in Honduras.

Andrés said that there are a number of groups working on human rights in Honduras. In Tegucigalpa, they are heterogeneous, but tend to have a liberal social model, whereas in San Pedro Sula, the other major city, the they have a more political focus because of the wider array of mass organizations there. Generally though, the groups have the same objective, the refounding of the republic.

CODEH was founded 29 years ago and has had one other president besides himself - the first was Ramón Custodio López who is now, ironically, the national commissioner of human rights in the coup government. Many people are at a loss to explain his transformation from a long-time defender of human rights to his current position as commissioner of human rights under the coup regime. There is some speculation that he may have become senile. Andrés thinks, though, that although Custodio was the mentor, throughout history, the mask often falls from the mentor. The disciple may overcome the mentor, but rarely does the mentor change position.

Andrés said that the level of murders in general has risen sharply from 53 per 100,000 under Zelaya's last year to 75 per 100,000 in just six months following the coup. One unusual detail of these deaths is that there are 56 bodies that no one has claimed.

As for political murders, there are now 53 cases with a direct link to the coup regime. Some of these cases were submitted the state, others to the Inter-American Human Rights Organization (IAHRC), an independent body of the Organization of American States based in Washington, D.C. The state has not acted on the submissions; the others will be considered at the IAHRC in March which Andrés will be attending. This is the first time since 1986 that CODEH has participated in IAHC's process, but in 1986 it was able to get a substantial monetary judgment against the state.

Andrés cited additional statistics with respect to political repression in the six months following the coup. A total of about 5,200 individuals have been detained during the coup, including 600 detentions during various marches; most of the detentions appeared arbitrary and included brutal treatment. Excluding San Pedro Sula and the north, there were about 1500 detentions in the department of Paraiso and Tegucigalpa. This number includes:

The documentation process is difficult; many of the human rights violations and deaths are thought to be the work of the coup, but this often cannot be verified. In addition, the state forensics department does not include the whole country, so many people have died with no official record. Often the participation by victims can only be documented by talking to other people who were involved in the same activity.

Andrés said that the human rights groups are attempting to integrate their statistics with each other; as of now there are between 32 and 36 fully documented political deaths.

He said that the principal media in Honduras are trying to understate the level of violence against the resistance, and trying to confuse persecution of the resistance with common crime. The human rights organizations are also forced into the position that they must recognize the illegal presidency if they want to file documentation relating to human rights violations.

He did say that in the United States, solidarity activists could press for an independent truth commission. It also remains to be seen what kind of role the Organization of American States could play.

He discussed the "amnesty" that has been offered by the coup government. Since the state does not acknowledge the existence of any political crimes and will therefore not include those who were charged for activities resisting the coup, the amnesty is meaningless. In addition, the government has begun charging people with sedition, which will also not be subject to the amnesty, although in fact the constitution gives citizens the right to undertake an insurrection in the case of a usurper government.

The amnesty will, however, absolve the Micheletti government of any crimes. In fact, international law holds that there can be no amnesty for crimes against humanity.
Posted by HandsOffHonduras at 3:28 PM